The Marlin Trapper is a super light (7 lbs), a very short (16 1/2 barrel) and a devastating firearm on short and medium distances. Need to stop a charging grizzly? That will do the trick.

Wheeling alone in the wilderness is not without danger.

Get ready to protect yourself against grizzlies, polar bears, wolves, cougars, or even car jackers and other bad guys. Because you never know what's going to happen once you're driving in the remote the wilderness. 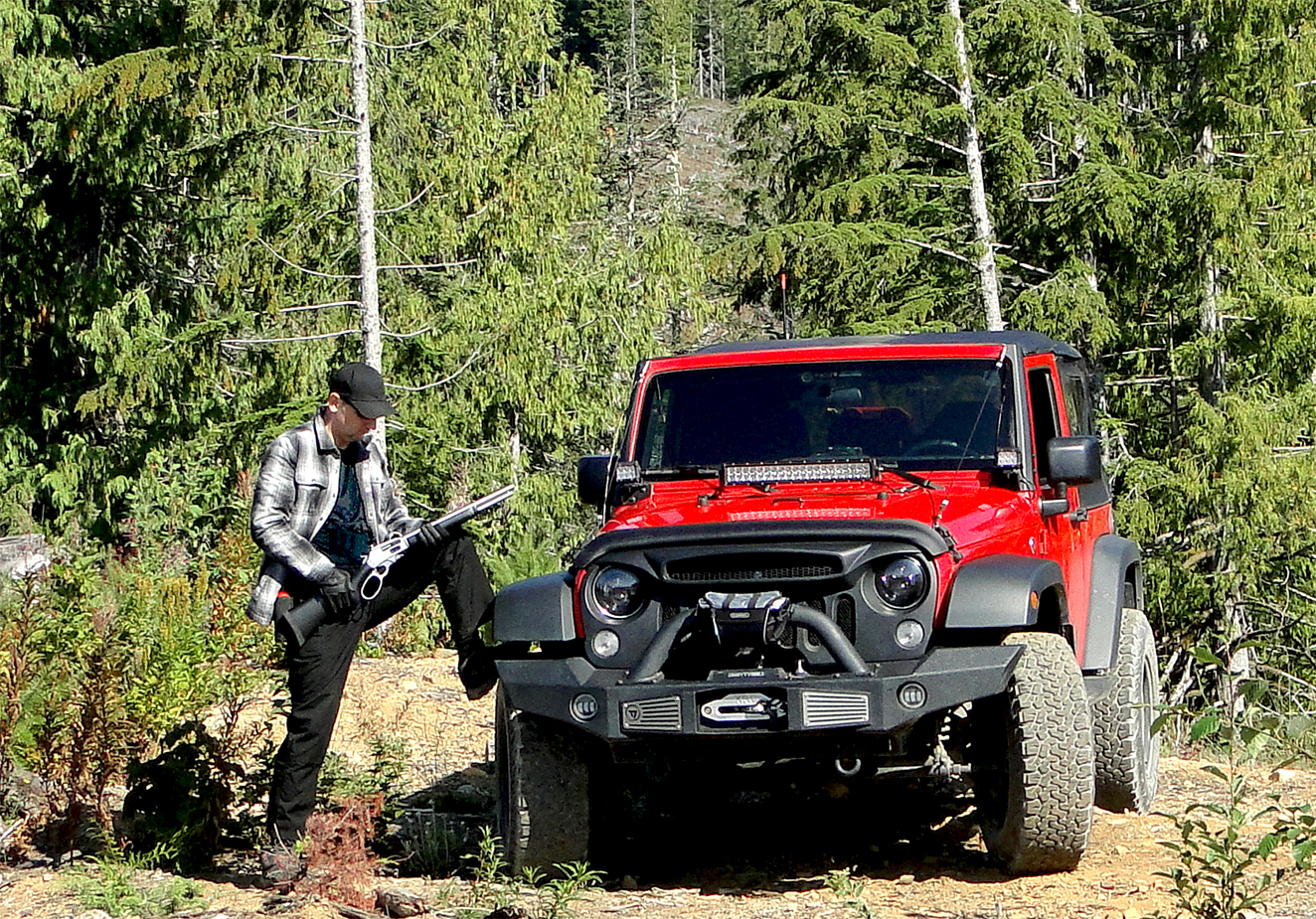 No Jeeper should hit the trail alone and for very long distances without a legal, powerful and reliable self-defense weapon. The iconic Marlin 1895 is now available in the Trapper's version.

Do you need a firearm while off-roading alone in the remote wilderness?

Newcomers on the Jeep scene often ask me: Should I get a firearm if I want to scout the wilderness alone? Well, that's a good question. There are 4 things for you to fear.

1. Stupid people : You can get severely injured or even killed by stupid people and/or deplorables. They use to shoot at bbq propane tanks in the middle of the night. They drink and drive because it's so cool to never see a police officer on the trail. Or they speed on gravel/icy/muddy/logging roads with inappropriate and/or worn off tires. Fortunately, stupid people are very scarce. They normally get fed up after a week or so and never come back. Others will hurt themselves or die of stupidity. I'm serious. For example, they shoot themselves in the foot while chasing a deer, run out of gas and freeze to death during winter temperatures, or drown themselves trying to cross the treacherous Teklanika river because taking a selfie in front of the "Magic Bus" is on their bucket list (Why another death on trail to 'Magic Bus' won't stop adventurers).

This is Brett and the Bus (https://www.flickr.com/photos/paxson_woelber/6941856773). Looks like he made it. I'm not mocking him. Just saying it's dangerous to get there.

Don't get me wrong, I'm not saying that you need a gun to protect yourself from Brett and his friends. Actually, most are the nicest people you can encounter. But they have a dream. And that dream makes them reckless and unpredictable. They are often in trouble and begging for help. They are very good at making "their" problem becoming "your" problem.

This guy had a flat tire. Then, the spare tire had a flat as well. That's what happens when you go for an adventure in the remote wilderness with $35 Champiro tires. This is what I mean by their problem becomes your problem.

2. Bad guys : Since I can speak for Alaska and Montana (USA) or Yukon, the Northwest Territories and Alberta (Canada), I would say that 98% of people you may "encounter" on the trail are engineers, experienced gold prospectors, well organized adventurers, professional trappers, conservation officers, registered outfitter-guides, hunters having the time of their life, etc. And First Nation members are even more polite and helpful people (unless you litter, disrespect sacred sites, etc. but that's another story). That being said, there are still (a few) poachers, wanted murderers, junkies or scary yahoos. They generally prefer to hide and avoid human interactions but most carry loaded guns and are dangerous characters. I should add that carjacking exists in the wilderness (I wrote a bit about it How to Prevent Carjacking in the Remote Wilderness). A can of bear spray and a lug wrench might seem like the perfect self defense plan while sitting in your living room and watching Family Guy. But I guarantee you will regret it the day you see an armed and very suspicious guy on a god forsaken, unmaintained and unpatroled trail. It's your decision and I wish you the best of luck.

Want to see bad guys? This is Kam McLeod and Bryer Schmegelsky, two losers who left their job at Walmart and headed to Yukon in July 2019. They killed three innocent people just for the thrill of it near Yukon border (CTV Manhunt). They also tried to kill a 4th man whom was sleeping in his truck in Yukon (9News). It could have been me because I was wandering myself in the area just a few days before.

3. Predators : Beware of misleading stats. Media and official stats tell you that only "tens of people" are killed every year by bears, cougars and wolves. First problem : a lot of people are never found. So, their death is not calculated. Second problem : the past is no indication of the future. I mean YOUR future. Yes, a grizzly will only bluff charge people 99% of the time (acting defensively). Now it's your turn. Are you sure you want to play Russian Roulette against this beast?

4. Your own fears : I'm used to spend time (alone) in the woods. I grew up as a scout (Baden-Powell Scouts' Association was a big thing in Canada when I was young) and have never stopped enjoying nights in the wilderness ever since. Beside driving a Jeep in the wilderness for a living, I also enjoy night cross country skiing (a lot!). Solo, of course (because I'm a loner). And I'll tell you what: I'm not scared of the dark at all. But sometimes, imagination plays tricks on me too. Let's say that I sleep better with a loaded firearm. 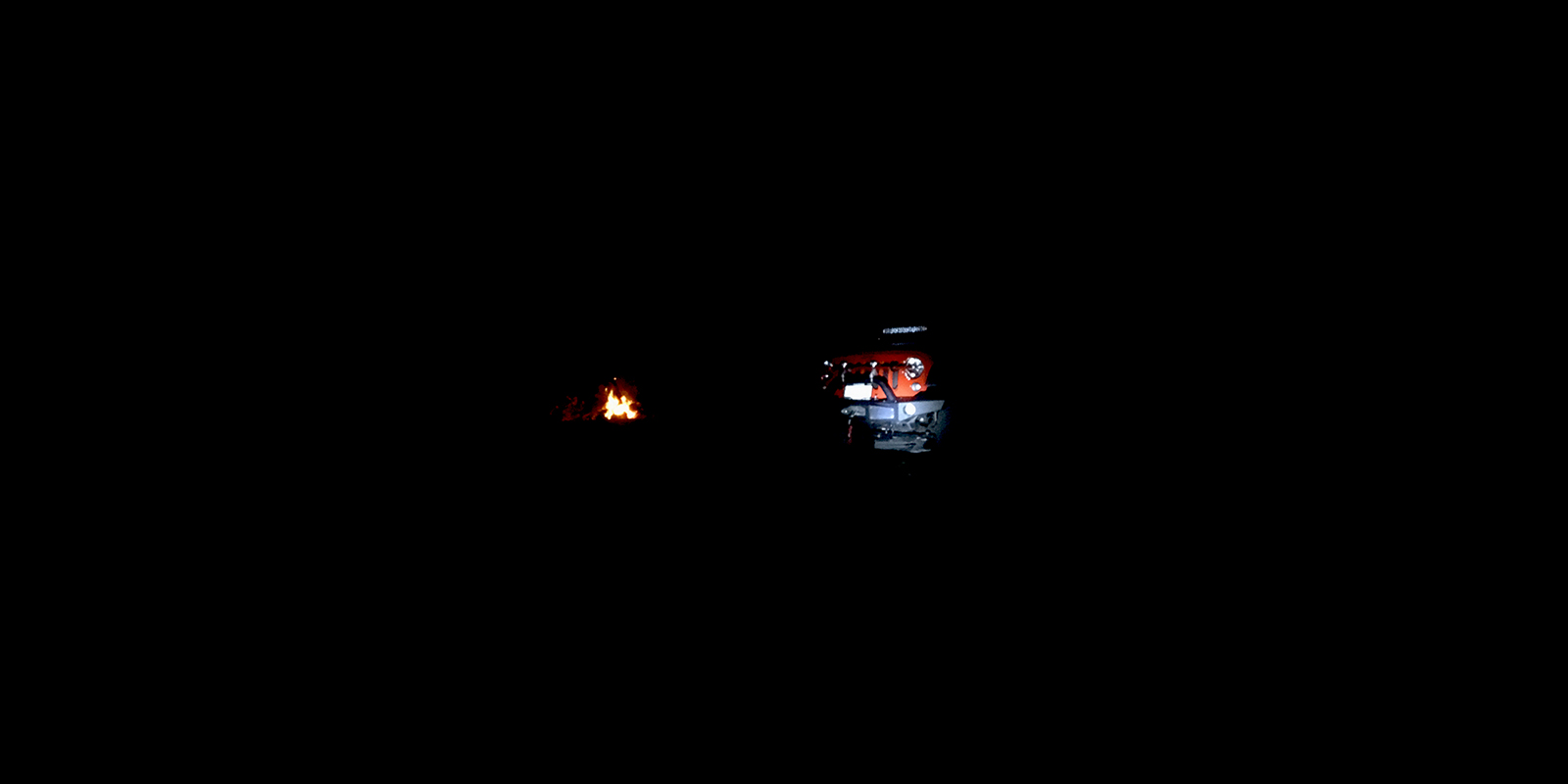 Why is the Marlin Trapper 1895 my favorite 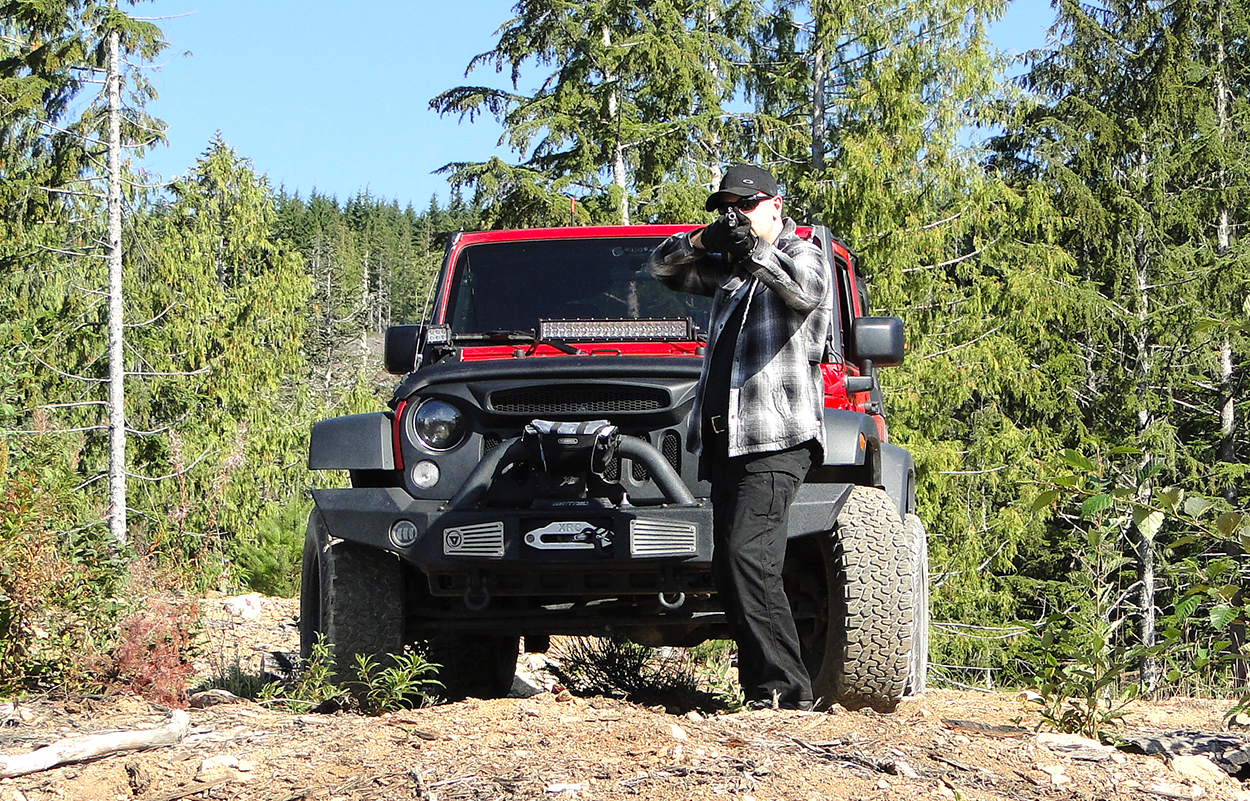 100% American Lever-Action Rifle : I'm a French Canadian but an American history buff who loves and admire American patriots. I'm fond of USA made products and support you guys as much as I can. And I warmly invite Canadian Jeepers to do the same. Now, I dare you people to show me something more American than a Toledo-made Jeep Wrangler or a lever-action Marlin 1895 chambered for the .45-70 Government cartridge. You won't. Made in North Haven (CT) and Mayfield (Kentucky), this rifle is not well-known by hunters but widely spread throughout Alaska and Yukon among gold prospectors and outfitter-guides.

Powerful : This Marlin 1895 packs a lot of power with a muzzle velocity over 1700 FPS and a muzzle energy of more than 3000 ft-lbs. It's powerful as hell (I said AS HELL) and will stop a charging grizzly dead in its tracks. It's a very unforgiving rifle (to say the least).

By the way, does this rifle look familiar to you?

Yes, it's the one used to shoot dinosaurs in the movie Jurassic World. Except that this guy is using the Marlin 1895 SBL version, which is 2 inches longer (37'' compared to 35'' for my Marlin Trapper). If you want to see the short Trapper version featured in a movie, see this one.

I warmly recommend you to watch this movie. A veteran game tracker teams up with an FBI agent to catch a bunch of killer rapists in Wyoming (during winter). There is a gunfight at the end involving the Marlin Trapper. You won't regret watching it.

Lightweight rifle : It's only 7 lbs. I'm dead serious. A 7.0-lbs rifle built to handle powerful big-bore loads and that feels like a toy in your hands. And you have an opportunity here to shave weight off your Jeep because weight matters in the bush. You should be a weight-wise off-roader for various reasons ranging from better gas mileage to braking control and faster vehicle recovery (Why and How to Reduce the Weight of your Jeep). You will love this light firearm too if you ever get stuck for good in the middle of nowhere and have to walk 30 miles / 50 km to reach civilization. A Marlin Trapper is the best trail buddy for your B.o.B (Prepare a Bug-Out-Bag for an Off-Road Expedition).

Super short rifle : The overall length is just 35'' (barrel 16.5'') and it improves the handling of this lever-action.

This is the Marlin Trapper vs. the Remington 870 Tactical Shotgun.

Fits in a short scabbard : If you were looking for an overhead gun rack for your Jeep Wrangler JK or JL 2-Doors, I have a cheaper option for you. You only have to attach this Red Rock Scabbard to the sound bar + sports bar with velcro straps. It won't budge on rough terrain and this scabbard holds your Marlin tight. 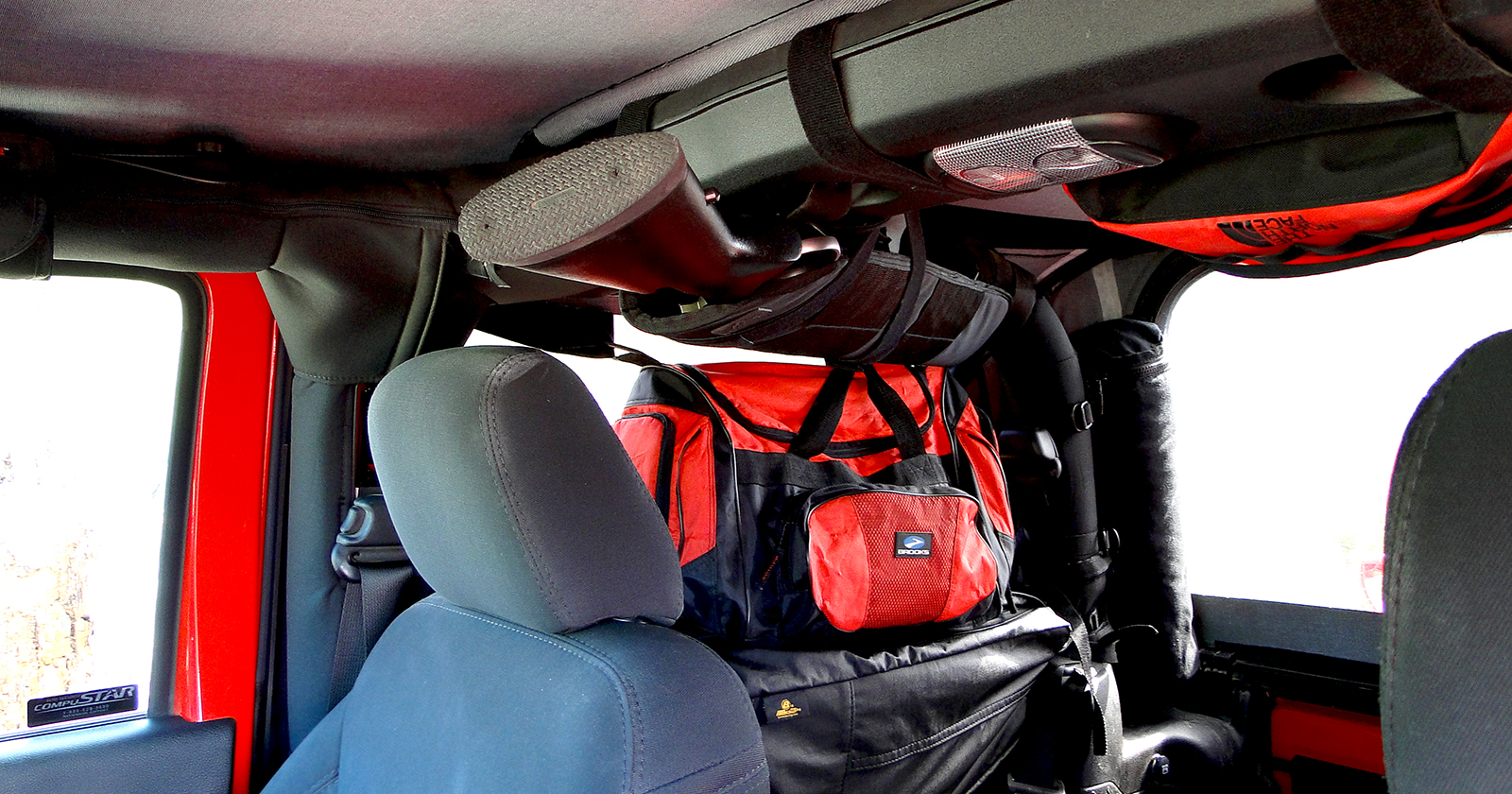 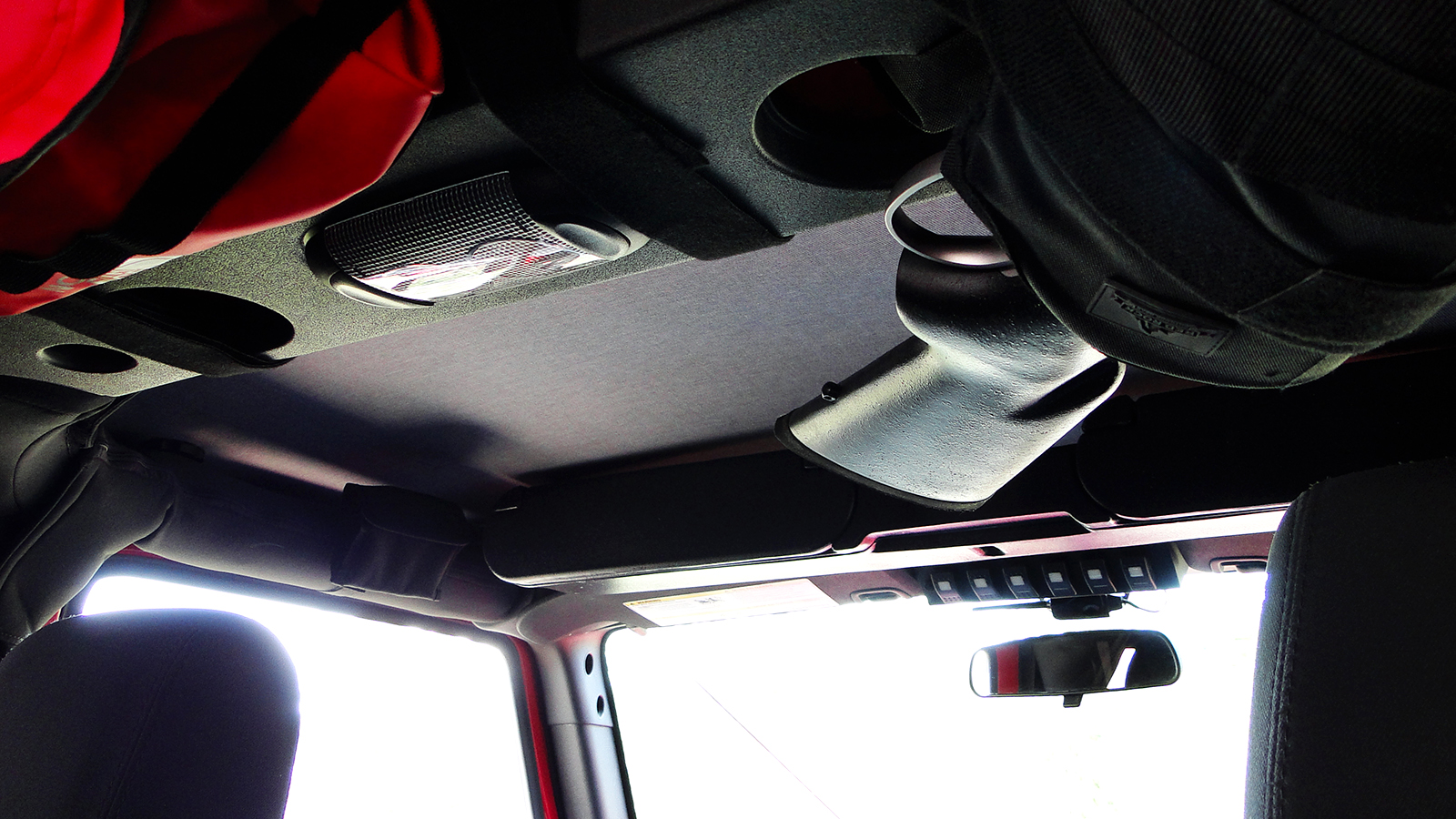 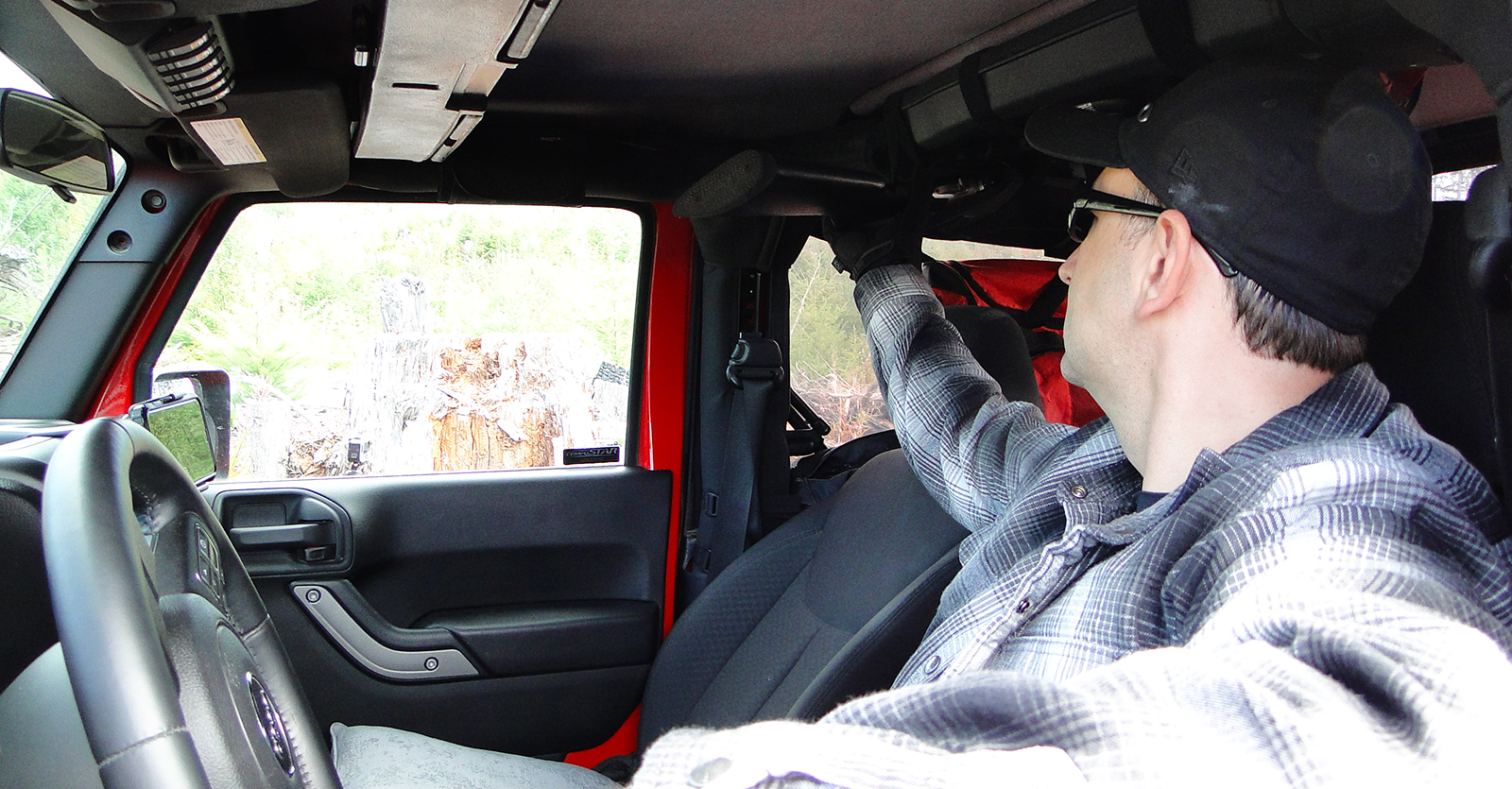 Draw your gun fast : The scabbard stays in place and acts as a holster. It's easy to draw fast in case of an emergency. I'm in love with my Marlin because she is short, light, handy, powerful and accurate at the same time (for close-range and medium-range defense). I used to carry a Stoeger double barrel shotgun on the trail for years but this Marlin is more powerful, has a 5 round magazine (+1 = 6 rounds if chambered), and the peep sight offers me faster and more accurate target acquisition. 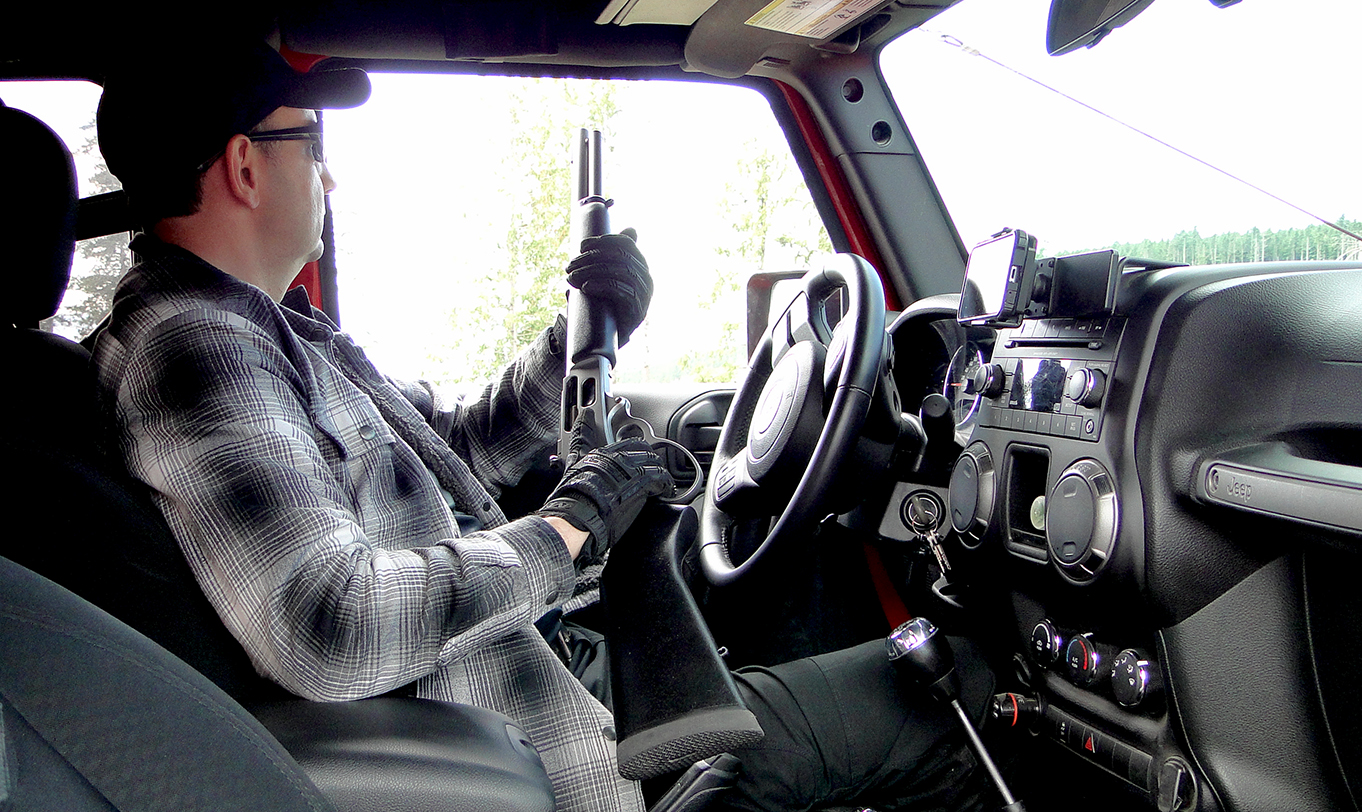 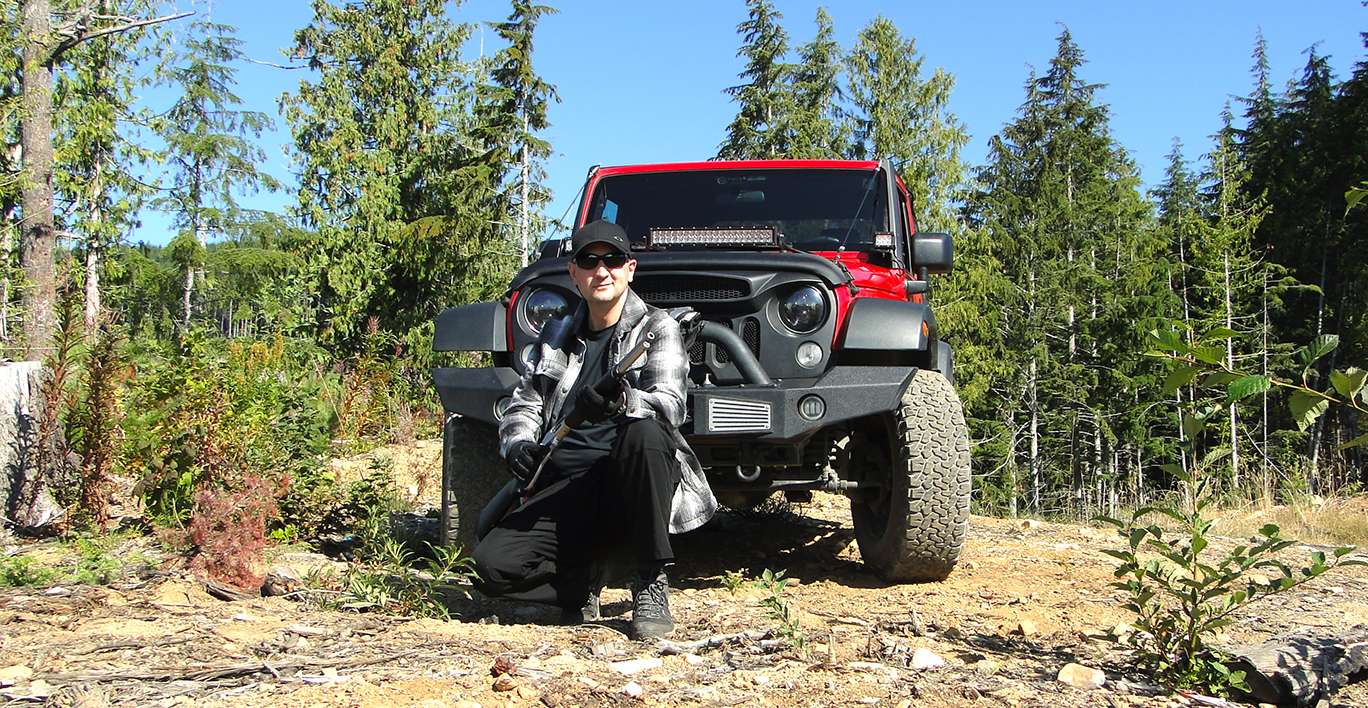 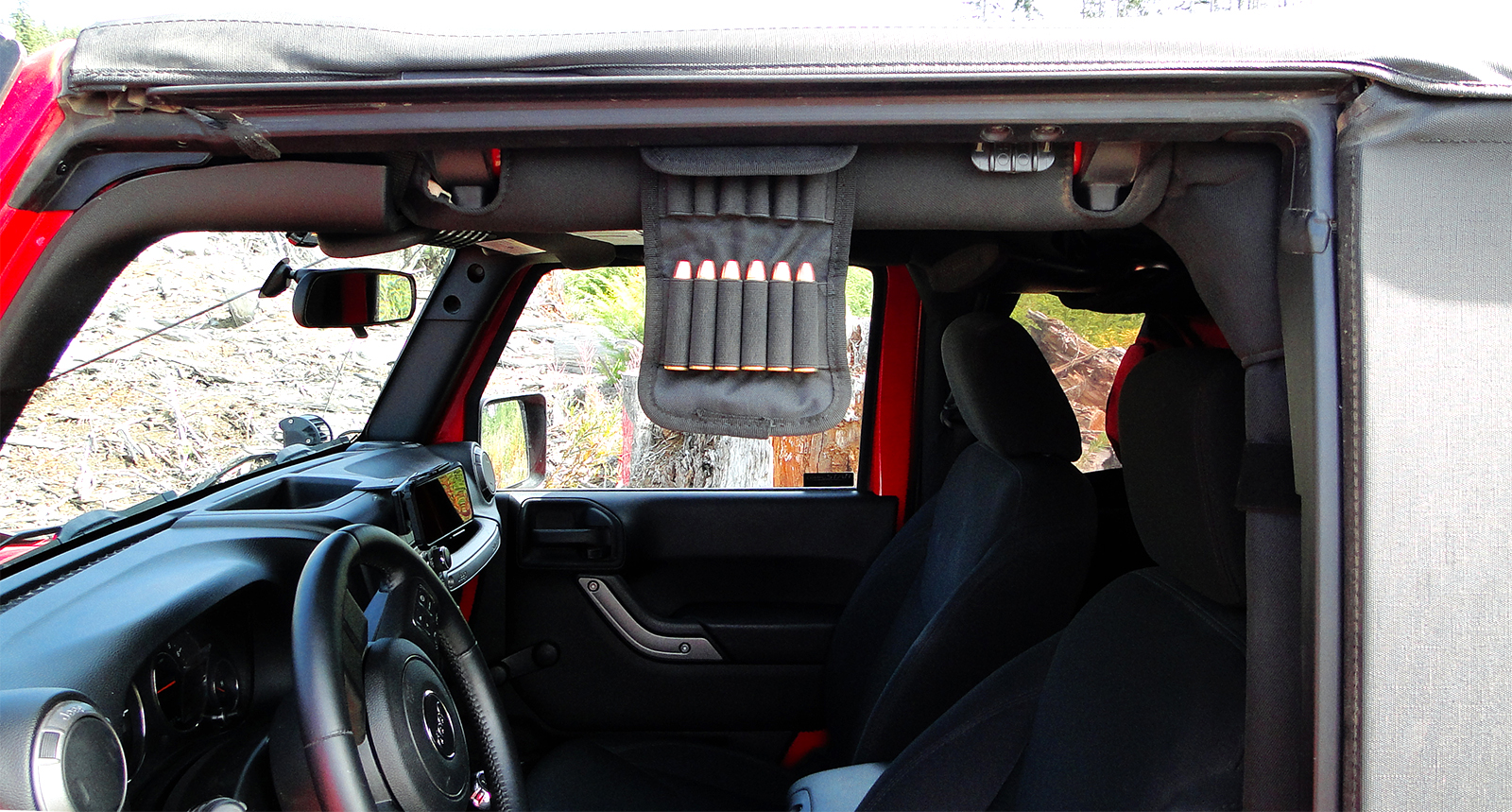 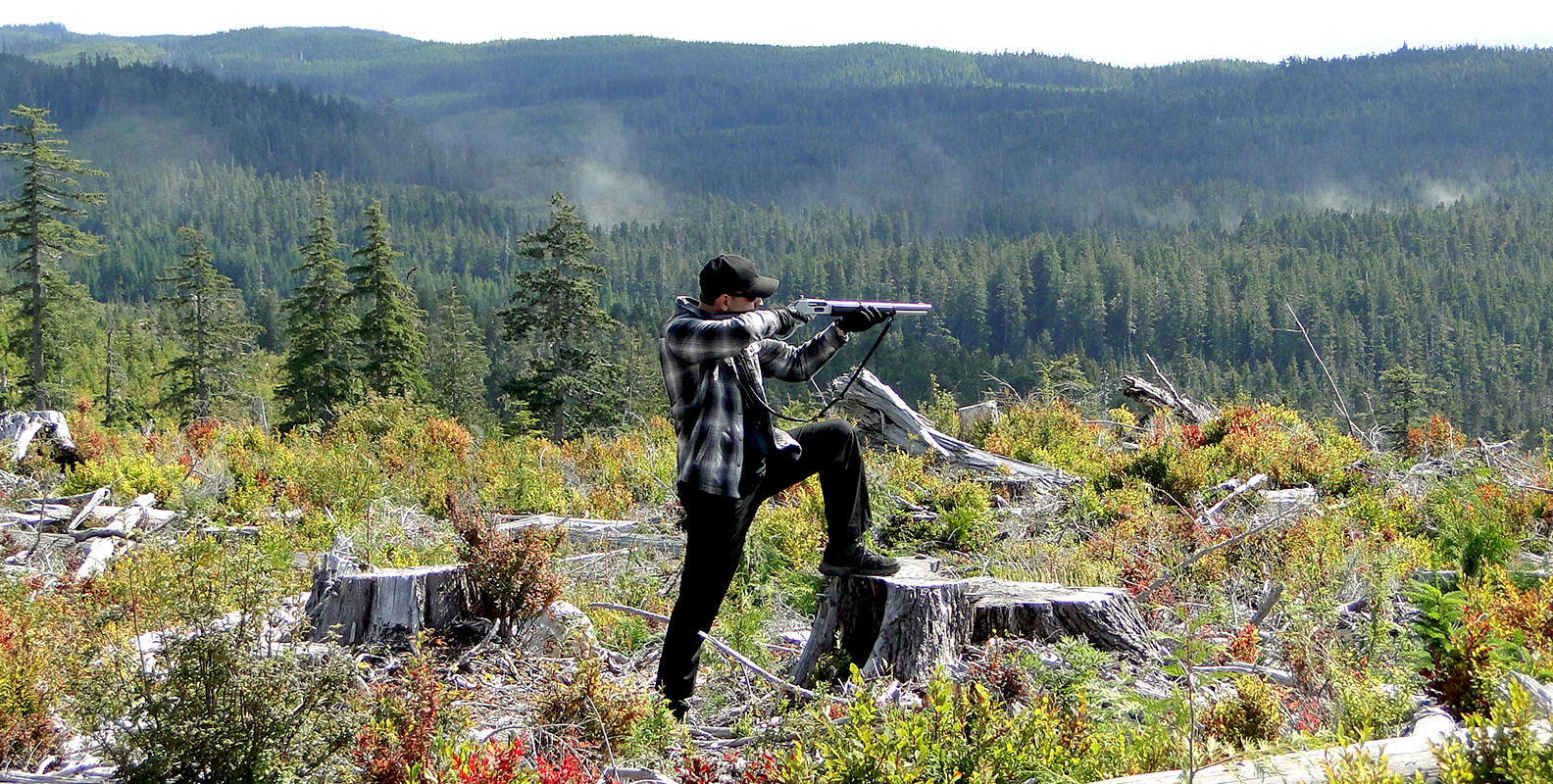 However, I personally carry bear spray attached to my belt at all times. I strongly believe that all off-roaders should do the same. Relying on a shotgun or a powerful rifle for bear defense isn’t a safe or realistic strategy. Most of the time, both your hands are busy doing something (gathering firewood, repairing your Jeep, handling recovery gear, watching the landscape with your binoculars, and so on). I think a firearm is a pertinent addition to any solo off-road kit, and that’s why I’m sharing with you a way to store it in a comfortable manner. But if the wilderness scares you to the point of wanting to have a firearm in your hands, on your back, or just beside you at all times, you are probably going to endanger yourself and others. Hey, don't be a sissy and just carry that bear spray. It's easy to do it all day long and you'll stop noticing you have it after a while. 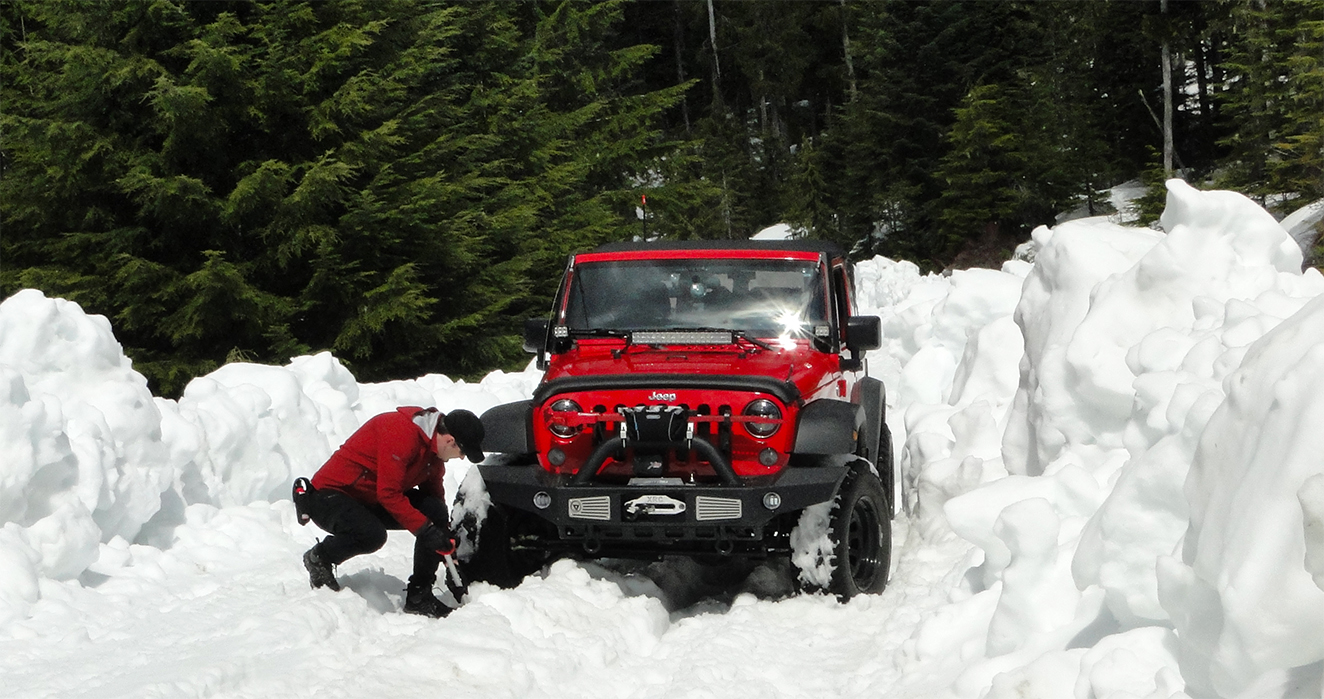 This red can of bear spray looks really nice and professional.

Thousands of people disappear every year in the Canadian, Australian and American remote wilderness (2,000 in Alaska only, read 60,700 people have been reported missing in Alaska since 1988). Most of those missing people are dropouts, hermits, men refusing to pay child support, etc. Others go missing because of suicide, accident, illness, food poisoning, harsh climate, etc. But dozens of others are killed by predators or murdered and their bodies are never found. On my side, I prefer to rely on an all-weather, super powerful, light and compact lever-action rifle built for fast shooting in dense cover and refined enough to make an accurate shot at a target moving fast (from a distance ranging from 5 to 75 yards).

(*If you want to know more about my beloved Marlin Trapper, I recommend you this article: Gun Test: The Fast-Handling Marlin Model 1895 Trapper in .45-70)