Step #2: Get rid of the tent, the air mattress and the sleeping pads. No more camping gear.

How to Sleep in a Wrangler JK JL 2-Door


It’s very possible to sleep comfortably in a small Jeep. I do it all the time. I'm going to explain how.

Whether you get stuck overnight, face mechanical issues that will take days to fix, suddenly feel dead-tired in the middle of the day, or feel like going camping because you need several days of driving to reach your next (very remote) destination, you can count on a “ready-to-use” bed in the cargo. What follows is my Wrangler JK 2D camping setup. 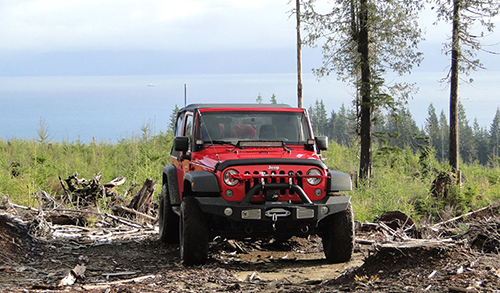 Prepare your first expedition with your Jeep in the extreme remote wilderness. Build your own bed in the small cargo area of your 2-door Wrangler JK, JL, or Rubicon.

Why sleeping in your Jeep JK/JL 2-Doors

1. Feel safer and have a better rest : At night, a small 30-pound porcupine makes as much noise as a large black bear. Everything is amplified, eerie, strange—especially if you are new to all this. It’s easier to stop worrying about roaming wildlife if you are sleeping in your zipped and locked Jeep. Some guys are so scared that they prefer to urinate in a bottle instead of going outside. Whatever scares you (bears, cougars, wolves, serial killers, alien abductions, bigfoots, leprechauns, clowns...), no one could argue that it’s safer to sleep in your vehicle.

2. Be ready to leave in a minute : Choosing a campsite in unknown territory might expose you to a scary encounter. I’m thinking of roaming predators, of course, but also bad guys you don’t want to deal with. I must say that weirdos, roving gangs, or obvious criminals are super scarce in the North American wilderness (based on my experience in Alaska, Yukon, the Northwest Territories, BC, Alberta, Washington, Oregon, and Montana). The reason is certainly because wandering off-road in the remote wilderness requires preparation, costs money, and quickly takes its toll on vehicles. 95% of people I have met over the years were busy workers on duty, hunters or adventurers having the time of their life. But stay prepared to eventually face uncomfortable situations. I was once sleeping in my Jeep at the top of some hill when a convoy of pick-ups appeared in the middle of the night. They parked down the slope about 200 feet from me. Then, a bunch of drunks quickly built a fire and started discharging shotguns (for the fun of it) in the dark. They probably never noticed my presence, but I was glad to be able to quietly leave the area in a minute.

3. Don’t waste time (and energy) : Setting up the tent (or the tarp), packing/unpacking, pumping up/deflating the air mattress, cleaning/drying/repairing camping gear... I did that for quite a while until I just got fed up. I was wasting hours of my life. I prefer to spend that valuable time taking care of my Jeep.

4. Better shelter in case of severe weather : Strong winds, showers, puddles of water, heavy snow, ice... You won’t worry anymore. Particularly in case of a lightning storm. Technically speaking, science says that your four big tires are no significant insulators between your Jeep and the ground. And the sports bar, body, and frame of your Jeep won’t work perfectly as a Faraday cage. But you are safer for the following reasons: 1) The sports bars are poor conductors because there is a very small quantity of metal in there. And having a soft-top or a hardtop doesn’t make any difference because the hardtop is just made out of fiberglass anyway. 2) Compared to a hiker on foot, a Jeeper can move quickly to get better cover. You can move away from high peaks, lakes (you need to avoid the cover of tall shoreline trees), or glades in minutes. My advice: find a spot in the middle of a dense and low stand of trees, ideally located down the trail in the lowest area you can safely reach with your Jeep. 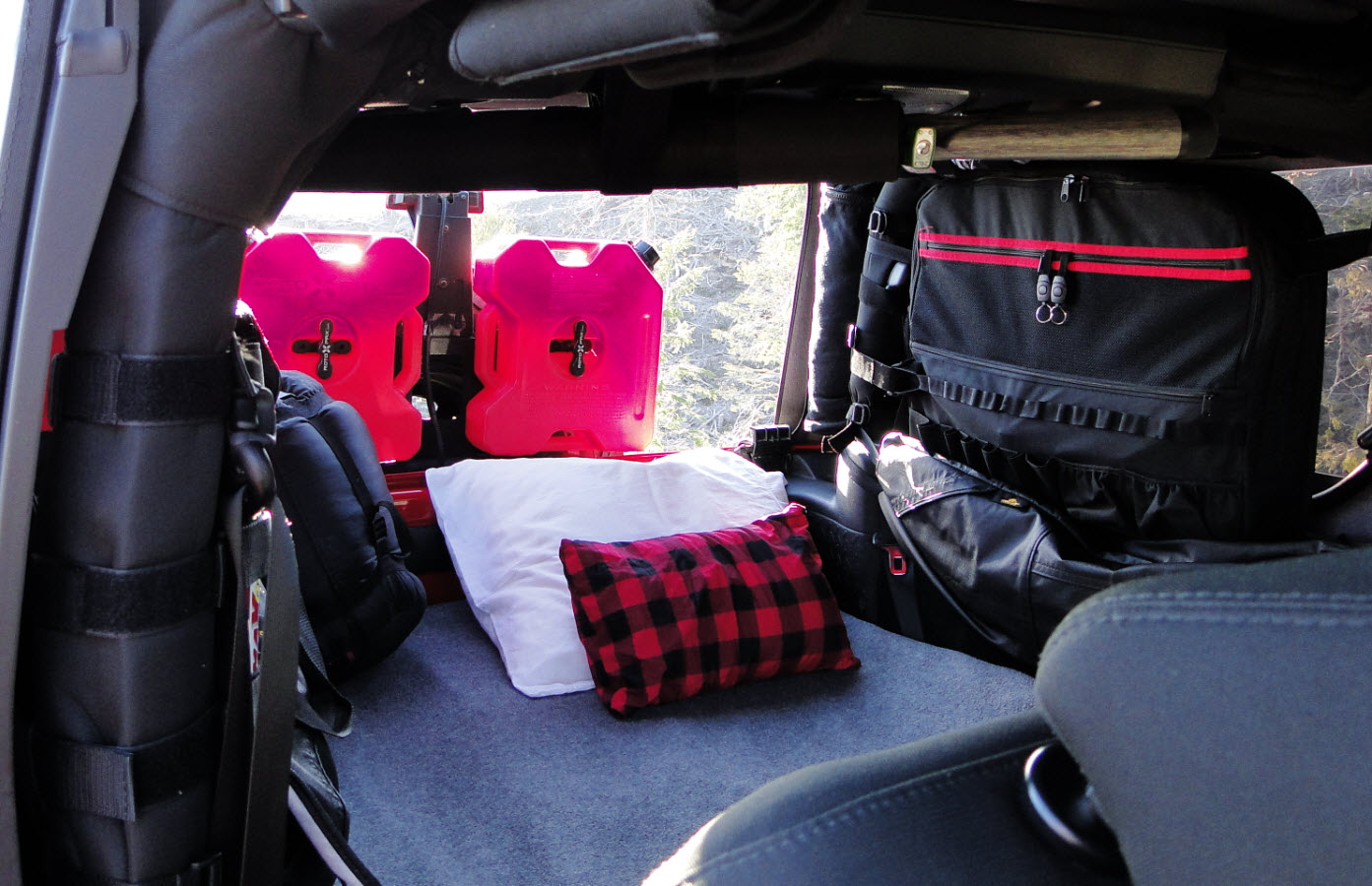 - 2x Viscoelastic Ventilated Memory Foam Mattress Toppers (3 inches each, full bed size 54 x 75 inches) : The first goal is to eliminate motion transfer. Because you will sleep in a cramped space, a thick memory foam reduces the number of times you need to toss and turn during the night. In other words, it eliminates motion transfer. The second goal is to take advantage of viscoelastic materials (made of polyurethane foam) because they are antimicrobial and allergen proof and make a good and lasting protection against various insects (including mites and bedbugs). That is the best “bed” you can carry into the remote wilderness.

- 1 Electric Turkey Knife : I used to cut with a sharp utility knife and later a carving knife until I discovered how upholstery experts work: with an electric kitchen knife! It makes super-accurate angle cuts. A cheap Hamilton Beach cordless electric knife that sells for less than $40 is very sharp and effective with foam. Tip: Cut your foam topper (without compressing it) on the edge of a table.

- 1 Jeep JK Cargo Liner (Rugged Ridge) : ): The dimensions of the Jeep JK trunk are tricky. I suggest you use a cargo liner in order to make a perfect fit. Those are expensive items ($80 to $180) but widely used in Jeep clubs. I suggest you carry your two brand-new foam toppers and try to borrow a mat from a Jeep club buddy. It’s going to take you only 10 minutes to draw the shape of the cargo liner over each foam topper (use a cheap felt pen). Don’t forget to keep the two toppers longer than the cargo mat in order to reach the back of the armrest console and fit against the back of the seats.

Cut the two foam toppers to roughly fill the remaining gap behind the driver’s seat, the armrest console, and the passenger’s seat (easy-entry position).

Cut around the armrest console

Voilà! You now have a 6-inch mattress (two 3-inch toppers on top of each other).

Note: When you sleep, move the passenger’s seat forward but keep the driver’s seat in its normal position (backward). It’s important that you allow for quick access if you need to turn the engine on or leave your spot in a hurry. 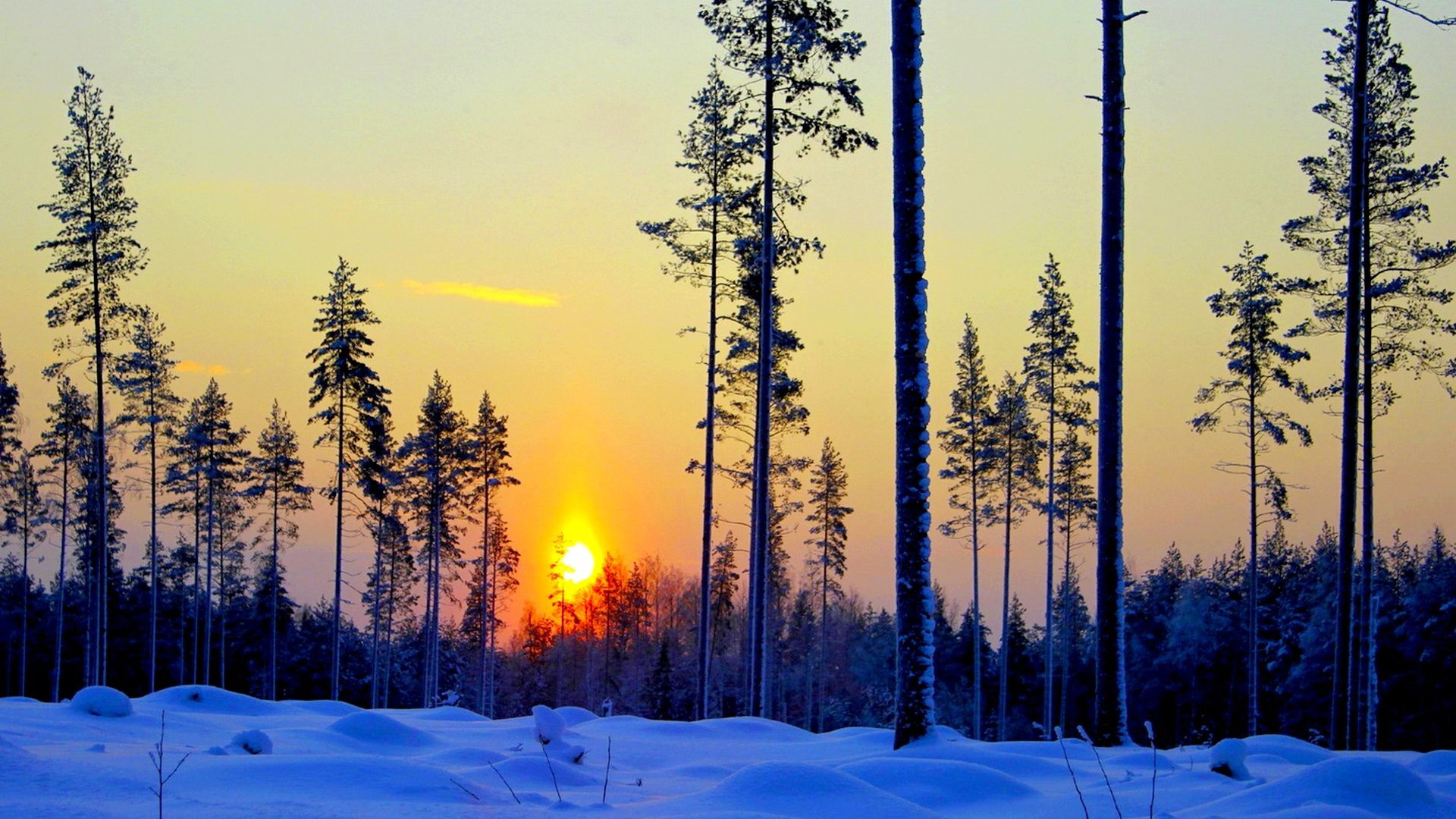 -10 Celsius/14 Fahrenheit : 3 Ways to Stay Warm while Sleeping in Your Jeep JK 2-DR
How to sleep in the cold

It took me a while to find ways to not freeze to death in the cold. First, my Jeep has a soft-top, and using Styrofoam pads to isolate (like many car dwellers do in the winter) wouldn’t be practical because the soft-top’s frame and the sports bars are in the way. Second, I have always refused to even consider letting my engine idle to warm up the vehicle during the night. Not only is it dangerous (exhaust fumes and various pollutants can lead to headaches, nausea, fatigue, confusion... or even kill you), but it also harms your engine by reducing the lifespan of cylinder liners, piston rings, exhaust system, spark plugs, etc. It wastes a lot of fuel too. In the worst-case scenario, I would still prefer to build a fire and sleep under a tarp than burning gas.