Is CB Radio Dead? Not on the Jeep Scene!

Get a CB Radio 300% more powerful than a conventional CB with the Bearcat 980 SSB.

CB radio might be (almost) dead in heavily populated metro areas. But it's a different story on the trail. A CB is easy to tune and operate, doesn't require a license and consumes a very small amount of battery power. I personally use the Bearcat SSB, which is 300% more powerful than a conventional CB radio. 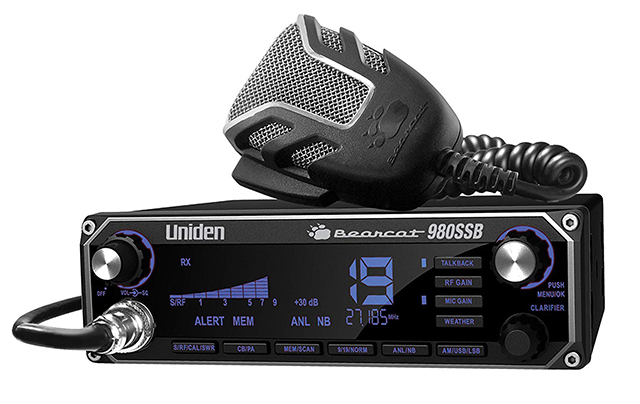 CB radio has probably survived until now because of the Jeep scene. Every month, thousands of Jeep owners in Canada and the United States are buying a brand new cb radio.

Is CB Radio dead? Not on the Jeep scene.

If you live in a metro area, you may think that only veteran truck drivers are still using a CB radio (and on the highway only). That's right. But if you are new to the Jeep thing, you need to know something: Jeepers are the second biggest market for CB manufacturers. Brands like Galaxy, Uniden, Cobra, Midland, President, and Stryker compete to sell us thousands of radios, antennas, and accessories every month.

Why is that so popular among Jeep onwers? For the following reasons:

1. Many Jeep clubs impose CB as a communication device to their members because handheld VHF or FRS two-way radios don't have enough range.

2. Jeep adventurers are often wheeling together and need to rely on a communication device powerful enough to provide at least 2 miles of range.

3. Jeepers are rebels and don't want to conform to HAM Radio rules and regulations (operating a Ham Radio requires a license).

4. It's the best way to make new Jeep friends. Yes, the "wave thing" is cool. But chatting while driving is even more cool. Because waving at strangers all day long won't get you new friends.

5. The CB Antenna looks awesome on a Jeep! That's why a CB is on the wish list of every Jeep owner. 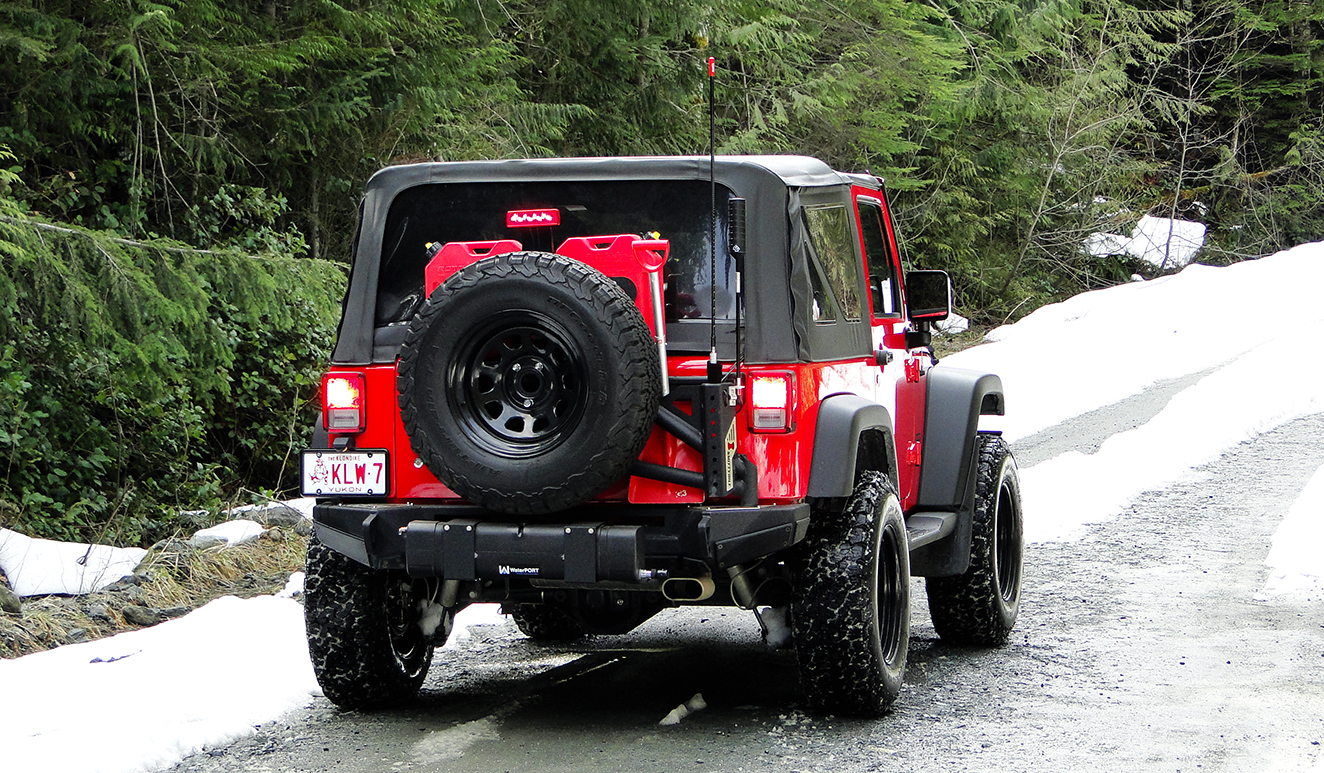 Why having a CB Radio in the remote wilderness

I'm driving a Jeep for a living in the remote Canadian wilderness and I strongly believe in CB radios. If you plan a long-distance expedition or to work with your Jeep in remote areas, you should install one for the following reasons:

1. To get help in case of an emergency. A classical CB radio has a range from 2 to 5 miles (3 to 8 kilometers). It might be enough to be heard by another Jeeper wandering in the area or even by a long-haul truck driver (especially if you have some altitude on mountainous terrain). You also have to know that there are sometimes atmospheric conditions that allow CB radio transmissions to travel very long distances (like 60 miles / 100 km or even more). It's called "shooting skip". Skip conditions happen when the Sun gets what scientists call "solar flares" (or "sunspots"). To make a long story short, solar flares shoot free electrons out into space that help CB radio waves to travel like crazy. Those conditions happen regularly and could save your life.

2. Channel 9 is still monitored (sometimes and in some places). Yes, there are still some conservation officers and emergency response units monitoring Channel 9. I've also seen private outfitters monitoring CB channels to stay in touch with their customers. Or homesteaders using it to communicate with each others. No Jeeper should underestimate the use of CB radio in remote areas. It's spotty but it still exists.

3. CB is gaining popularity among survivalists. I personally have great respect for Dan Sullivan (an inspiring and very serious prepper who is not into Zombie Apocalypse) and he believes that a CB remains relevant (www.survivalsullivan.com/heres-how-to-use-cb-radio-for-survival/). Many preppers share his thoughts. The fact is : there are millions of vintage cb radios that people keep stored in attics, workshops and garages throughout Canada and the USA. In case of full-scale disaster (I mean if all hell breaks loose), many people will certainly start using them again because they are very easy to power and operate. The good news is : you already got one in your Jeep.

4. To travel with other Jeepers. After so many years of Jeeping, I'm still amazed at how easy it is to make new friends in the Jeep community. When scouting remote areas, Jeepers tend to travel together although they just met. Don't miss the opportunity to chat on the trail using your CB.

5. To receive weather alerts. The Weatherband might be your only way to get weather forecasts in the bush (and wildfire alerts as well).

6. A CB consumes less power than a HAM Radio. You can't really use a Ham Radio while the engine is off because it drains a lot of power (easily 20 Amp Hours compared to 2 Amp Hour for a CB). So, it's possible to keep monitoring channels when you're not wheeling.

An SSB Radio is a CB Radio but with additional channels and a higher output power (12 Watts instead of 4 Watts). And it's perfectly legal in Canada and USA. So, what about its range? The following estimations are based on my own experience using an SSB on various terrains. 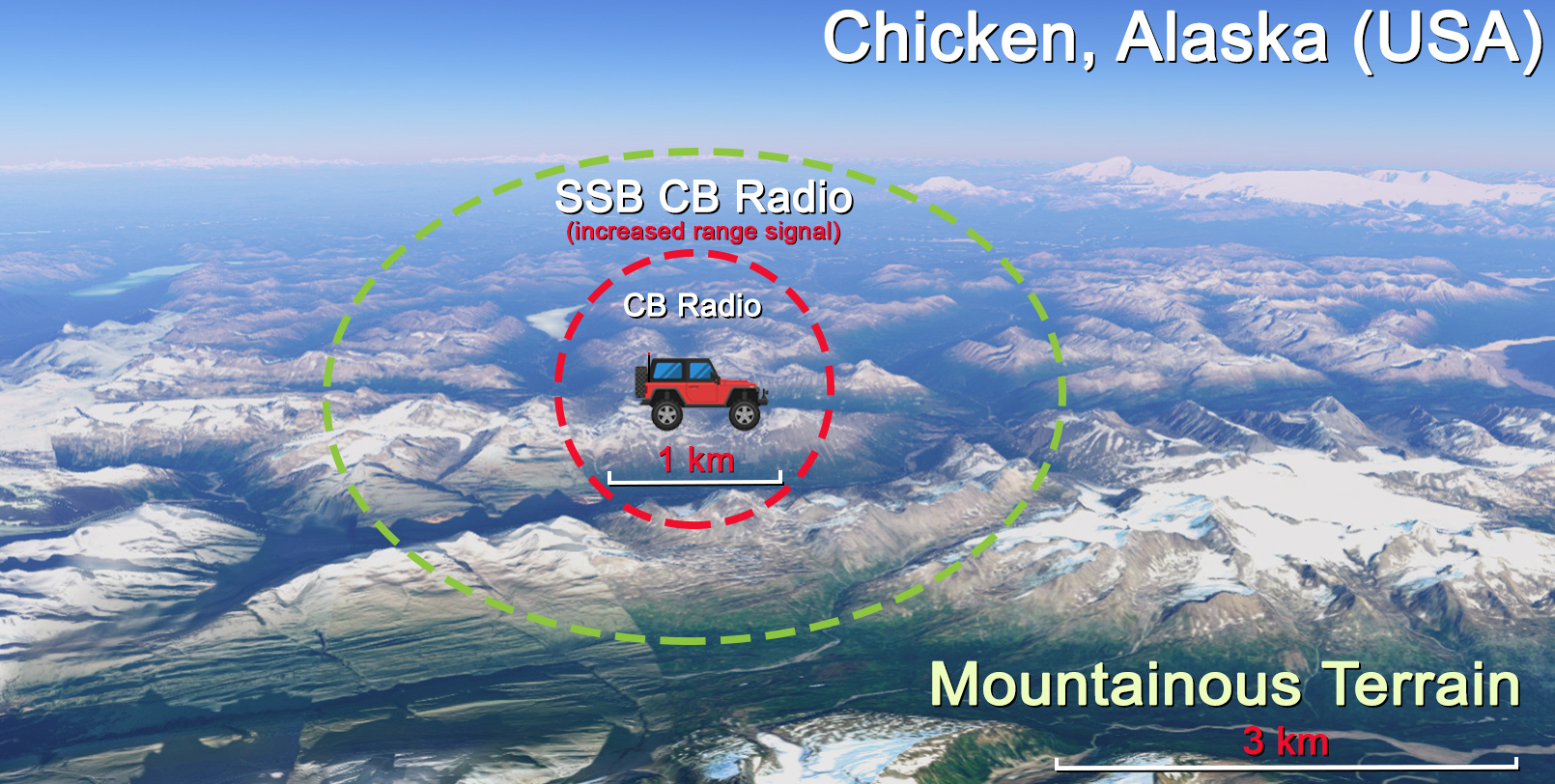 Two Jeepers both using an SSB radio can talk at a distance of 2 miles / 3.5 km while traveling across mountains. 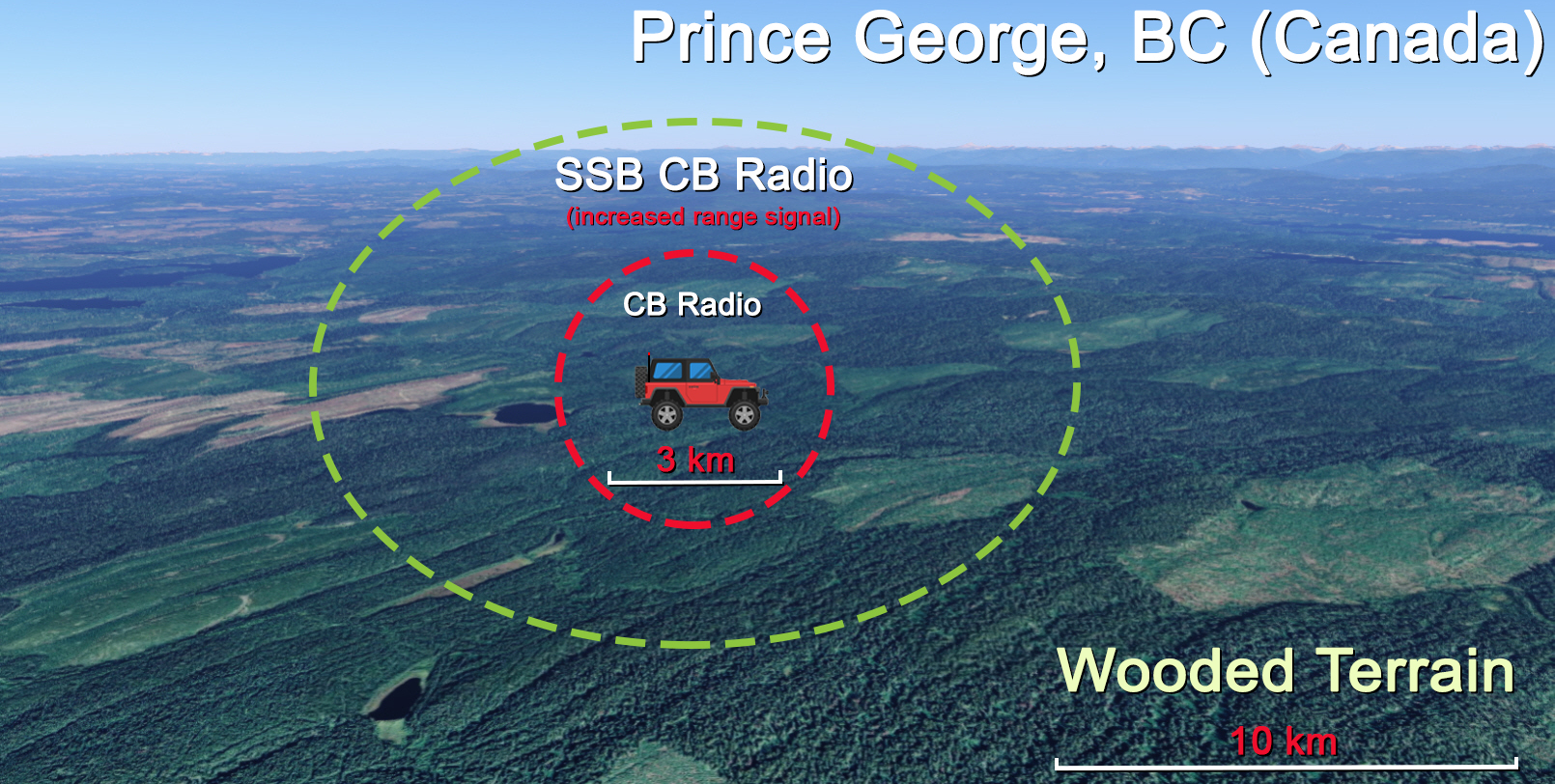 Two Jeepers both using an SSB radio can talk at a distance of 6.5 miles / 10 km while traveling across forests (dense foliage). 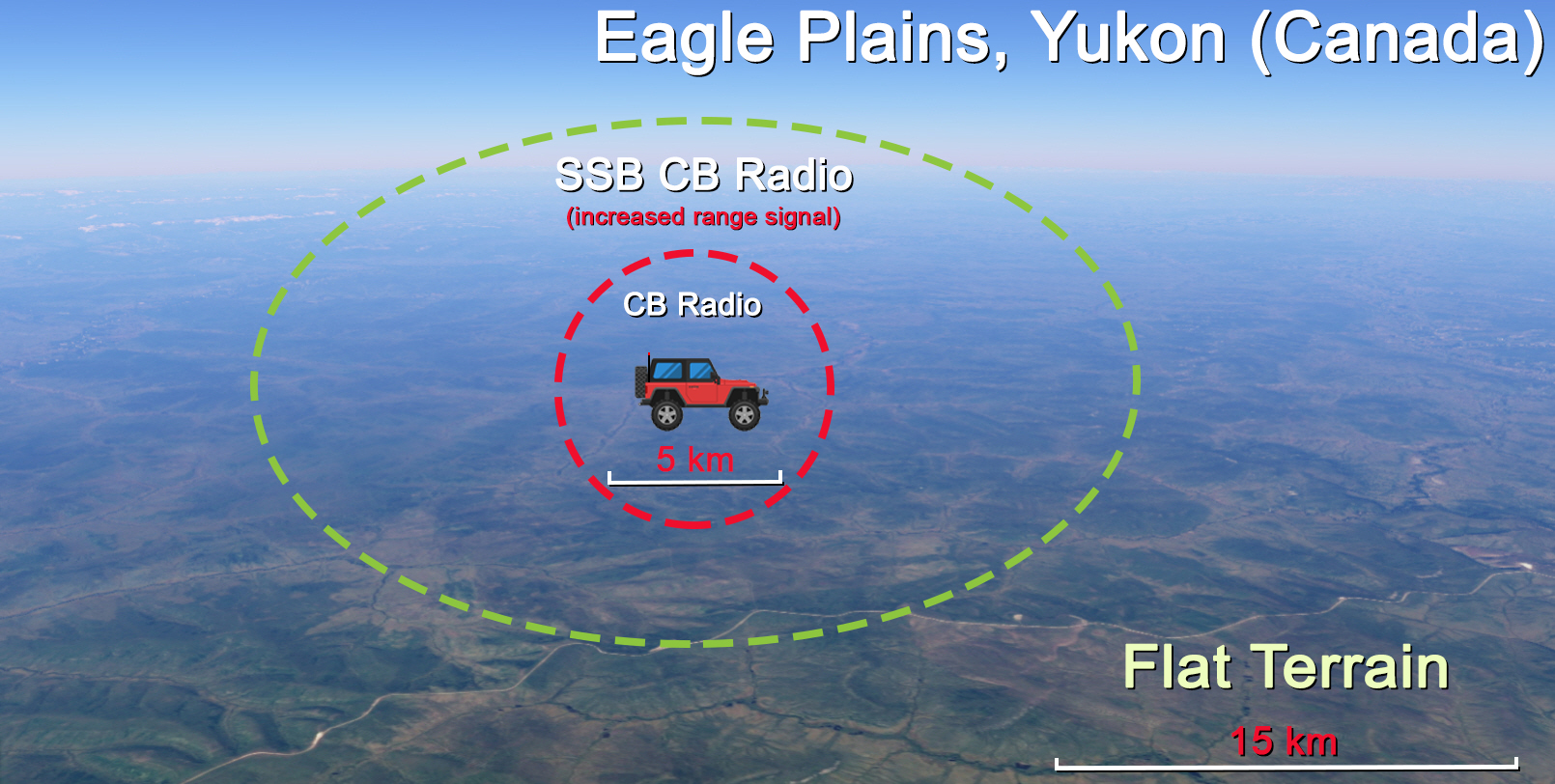 Two Jeepers both using an SSB radio can talk at a distance of 13 miles / 20 km while traveling across plains.

How to increase your range even more

Option 1 : Use a 4ft Firestick antenna (with a tunable tip) instead of a 3ft antenna: I must say that it makes a slight difference. Expect +10% more range. So, if you want to extend the range of your SSB (legally), the 4 feet is worth it. And the reception is probably 25% better too. So, on flat terrain, the signal will travel as far as 15 miles / 24 km. It's hell of a range considering you're only using a $350 electronic communication device (includes radio + quality 18-ft coaxial cable + 3/8 chrome stud + spring + flexible rubber antenna + mount) that doesn't even require a permit.

Note: I'm not using a 4ft antenna because I prefer to have a lower profile on the trail. When your antenna hits stray branches, your radio stops working for a minute or so. And repeated impacts will also force you to pull over and tune your antenna again (several times a day).

Option 2 : Install a linear amplifier. Amplifiers like MegaWatt S700-12, HYS TC300N and TekPower TP30SWV will amplify the output signal by up to 300 Watts (an SSB delivers 12 Watts). If your trail buddy has an amplifier too, you can expect an incredible performance. I've seen Jeepers talking at a distance of 25 miles / 40 km and I know you can achieve even more. But you have to know four things: 1) It's illegal. If caught, you'll be fined thousands of dollars and your vehicle will be towed as well. Several agencies (and even ham radio operators) can triangulate your position and report you to the police (so they can arrest you). On the other side, if you only use a cb radio amplifier in very remote areas, chances are nobody will notice. But in metro areas, very strong CB signals cause interference to other services (not related to cb channels) and those interferences are monitored. 2) You can damage your antenna and/or other components. Are you willing to a take that chance if a CB is your only communication device in the bush? 3) It drains a lot of battery power. You won't be able to use it without the engine running (so, it means burning gas). An amplifier will consume up to 30 Amp Hours. It's a lot. It's 200% more than a 150W 12V car heater. 4) It's expensive! Reliable signal boosters from brands like HYS, TekPower, Stryker or Orion are sold for $150, $200, $300...

- Built-in Tuner (use it to tune the antenna and increase range + signal reception).

- 7 different colors for the backlights + dimmable when you wheel at night.

- PA Function : connects to an external loud speaker and use it as a megaphone (a foreman driving a Jeep on a construction site or mining operation would usually use it to give instructions to crews on the ground).

- Auto-Diagnostics : you don't need to be an advanced CBer to tune and adjust it.

Stay connected while sitting in front of the campfire.

- Looks awesome on a Jeep

No one should mount a CB on the dash because it obstructs your vision on the trail. I don't like overhead mounts either (especially since I saw a poor Jeeper with a bad head injury after a low speed rollover in a ditch). Here is my favorite SSB CB Radio Mount :

In my Wrangler JK 2-Door (CB Seat Side Mounted) 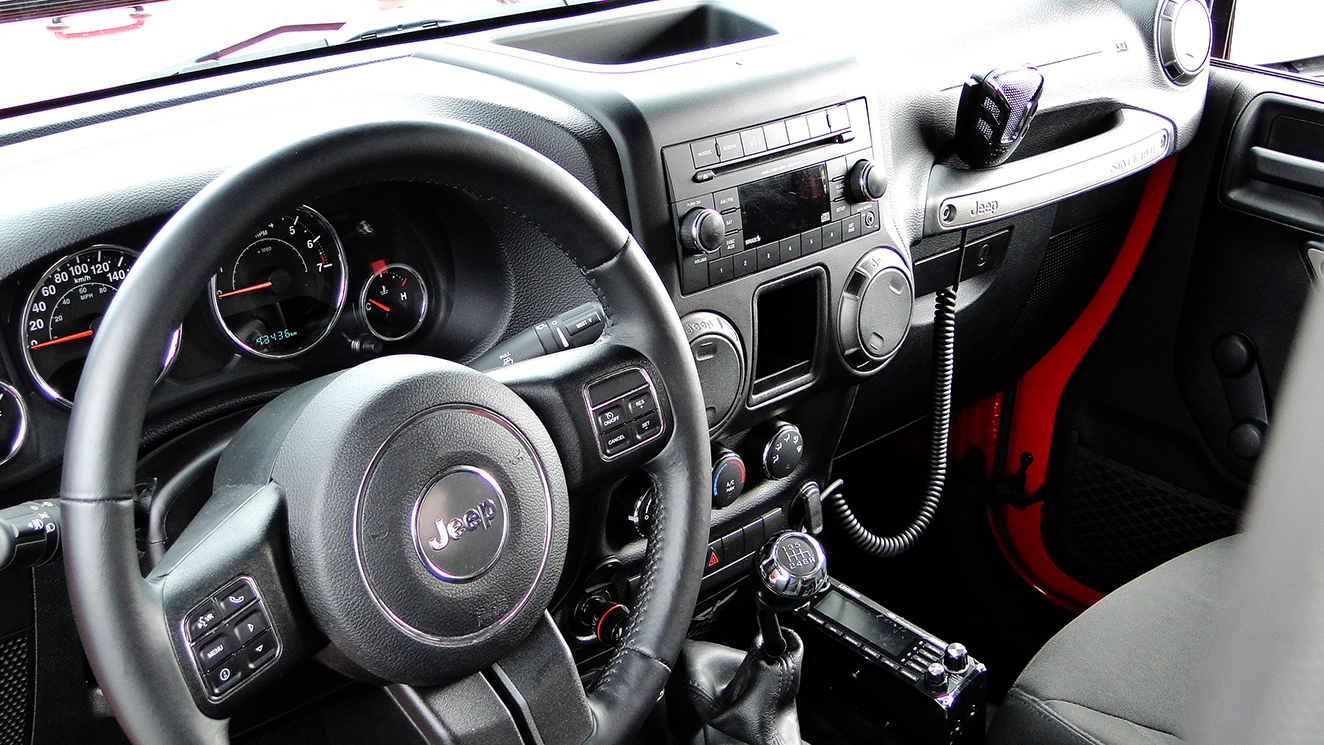 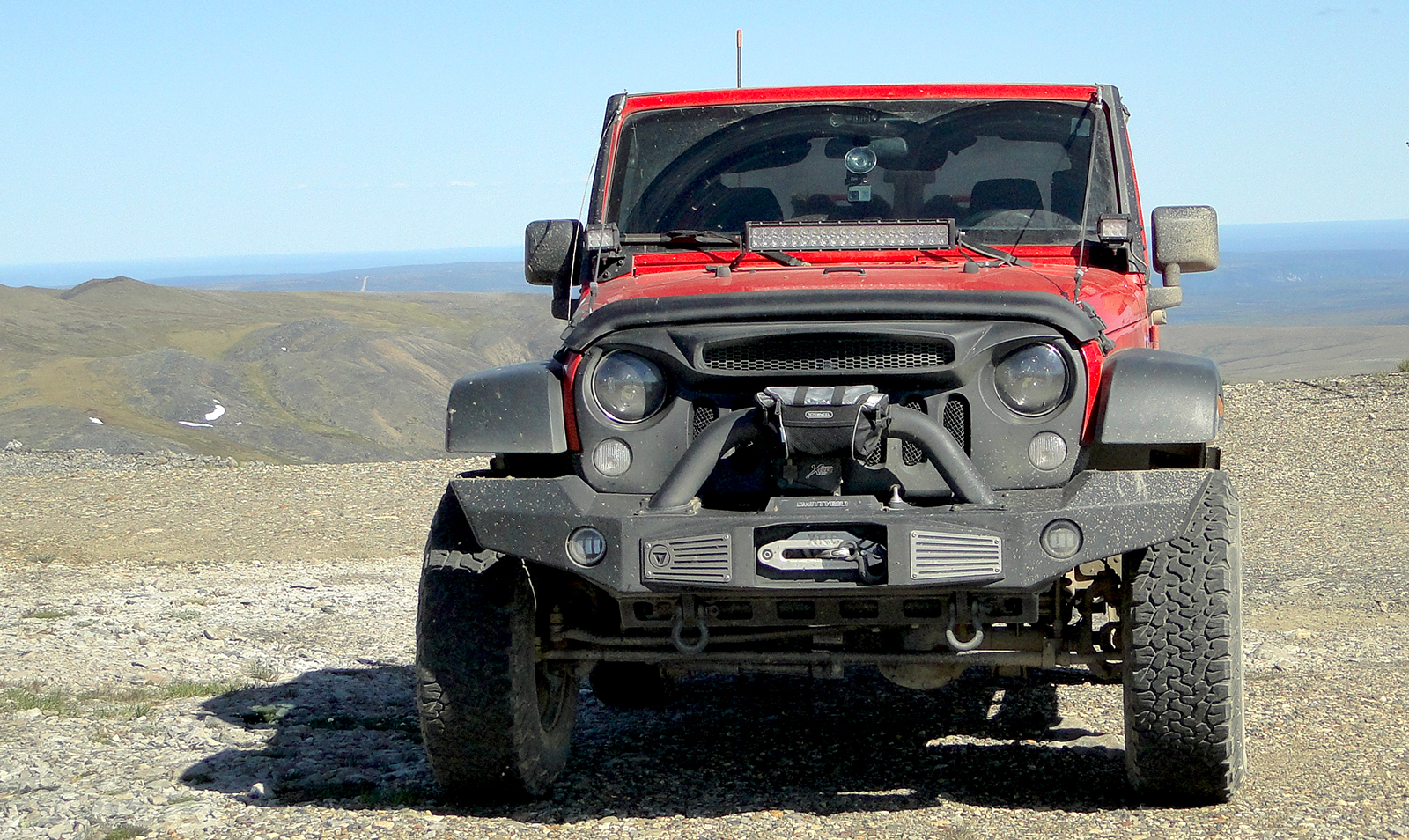